The Ideal Lifestyle – Are You Living Yours?

If you could be, do and have anything what would your life look like? If you could live the life of your dreams on a daily basis, would you? How good are you willing to have it?

I believe the greatest gift we have in the world is freedom. And that is why I chose to be an investor and entrepreneur. When I was introduced to real estate investing & entrepreneurship I saw a clear path of how I could be 100% responsible for my life and create the life of my dreams.

Initially I saw how I could make a lot of money doing it. After having early success and selling my first two businesses in college, I realized two things. I was working really hard, making money and the only way that money would keep coming in, was if I continued to work. If I stopped working, the money would stop shortly thereafter.

Secondly, I realized there was more to life than making money. I remember at the age of 22, when I sold my first company, holding the check in my hand and having this empty feeling in my stomach and thought to myself, “Is this all there is?” Don’t get me wrong, I like making money, but after making money I realized that making money by itself wasn’t enough for me. I also realized that there are millions of ways to make money. So if there are so many ways to make money why don’t I choose a way to make money that allows me to have it all… that allows me to make passive income, create wealth, spend my time as I wish and make a difference. I call this living your Ideal Lifestyle.

The following illustrates the process for living your ideal lifestyle. And like anything else in life, regardless of what you are building, the structure is only going to be as strong as its foundation.

Character – Dictionary.com defines character as the qualities of honesty, courage, or the like; integrity. Perhaps the importance of character is best illustrated, where it is missing. Lack of character has lead to both political and financial corruption and has lead to public distrust of some of our largest businesses and highest offices in government. As a result, perhaps more than any other time in our history, character is more important than ever. In my experience, I have found character to be the most important thing in choosing the people that I work with. Furthermore, I’ve found that character is not stated or spoken.

Character is illustrated by actions. I’ve found that the greatest opportunity to display your character is when your back is against the wall, when things aren’t going the way you would want them to, when you are facing what seems like insurmountable obstacles. Do you give in to the pressure and create a quick fix solution that compromises your character or do you honor your character, make some tough decisions and create a long term sustainable solution?

Mindset – One of the greatest books ever written about a successful mindset is the classic Think and Grow Rich by Napoleon Hill. In his book, Hill studies 100 millionaires in the early 1900’s including Rockefeller, Carnegie and many more and shares the principles and thinking these men lived by. Almost 100 years later, these principles remain true and remind us that at the core of our success lies a successful and empowering mindset. Having a winning and successful mindset is required to live your ideal lifestyle. Your own personal growth is critical to developing a successful mindset. Living your ideal lifestyle is a journey and therefore Constant and Never ending Improvement (CANI) is a must. In fact, I would argue that your business can only be successful to the extent you are able to grow and develop personally.

Financial Literacy – The first two foundational pillars have to do with what’s going on with you internally. This final pillar gives you the opportunity to create a strong financial foundation, to build a financial empire as big or as small as you would like. Having a solid understanding of financial literacy will empower you in making important financial decisions. While I could talk for days on this topic, there are 4 Financial Literacy lessons that are critical for building a solid foundation.

This is a preview of The Ideal Lifestyle – Are You Living Yours?. Read the full post (1168 words, 3 images, estimated 4:40 mins reading time)

Get Your Free eBook 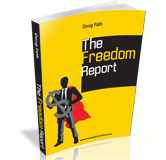 Sign up to receive my blog posts via email, my weekly newsletter and get a copy of my popular e-book on using real estate to create more freedom in your life, all for FREE.